Applications are open to recently graduated students who earned a bachelor’s or master’s art degree from an accredited university. Submissions were accepted from across the U.S., provided artists submit proof of their permanent residence in the area and/or commitment to contributing to the future of the region’s arts scene.

Congratulations to the 2020 Residents 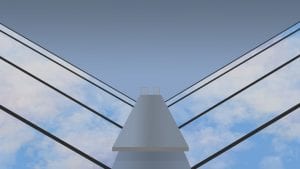 Vi Trinh is an interdisciplinary artist who works in digital and traditional media to examine the relationship between ecological and social patterns. Her work explores ideas of aesthetics in ecological emergencies and the temporal reality created by large-scale phenomena. She synthesizes data to confront ideas of colonialism and white supremacy within our current social context.

Much of her work is based in the internet and comes from the ethos of the internet as an illusionary space and the interaction with its interface.  The internet as it appears; democratic, and free, and the reality of exclusionary design by the very few and the profits they gain from it.  It has become the new ground of a very old problem.  Between the environment and people, the disenfranchised and society, the user and the internet.  She seeks a balance between technology and the internet not as antagonists created by colloquialism, but as multidimensional characters and potential allies.  The storyline for much of her work derives from a focus on objects and spaces surrounding humanity, without actually showing humans, architecture, design, aesthetics, technology, even A.I. trained by humans, built by humans, and strangely human themselves, it is about what is left behind and what that says about us and our archeological legacy.

Ashley Llanes is a queer identifying artist who makes personally political work about her Cuban American identity, her affinity for Miami’s culture , and her relationship with her upbringing as a Cuban Catholic as well as the strict cultural expectations that come with it. Ashley has a balance of reconciliation and criticism for her religious and traditional upbringing in her work. These topics are demonstrated through photos, collage, zine and bookmaking.

During her residency, Ashley will continue her exploration of materials and focusing on the concept of intergenerational trauma. Ashley describes, ” I would like to use large scale collages to go back through my family history and map out how my trauma relates to that of my ancestors. I have already begun to test these concepts with existing archives, family photos and found objects. A big component in this piece is also the investigation of whether I feel fit to have children, and what my part in contributing to the next generation would look like. With this residency providing a space, I would be able to plan out multiple pieces at a time and be able to produce works on a much larger scale. I think this concept is something that most every human can empathize with.” 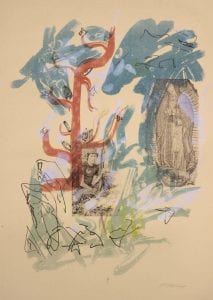 Luis A. Navas-Reyes is a visual artist whose work is a translation of abstract compositions that build upon his unique and personal visual vocabulary. His work is rooted in his identity, culture, environments, abstraction, power structures, familiar and historical histories. Utilizing media such as printmaking, drawings, ceramics, and bookmaking Luis explores themes, narratives, and forms. In 2018, Luis was awarded “Jurors Choice” at Artworks juried show. He was also selected to participate in the Dolph Project that contextualized contemporary art practice. Luis completed his BFA at James Madison University in 2018. In 2019, he was awarded a to research in Sevilla, Spain.

During his residency, Luis will be focusing on several projects, the first is called “Burnt Pages”. Luis states, “The goal is for Latino American’s to write down their stories ranging from everyday life to life-changing moments, why? Because in our shared past our stories were burnt, lost and fragmented due to colonialism and nature. But what if I make copies and burn the pages the stories are on? Why would I burn the stories? All Latino Americas are the conquerors and the conquered. We are the traitors but also the resilient. For me to burn my people’s stories is to give them life. Life carries on in the memories of others passing down the feeling they felt when they read those stories. Eventually, all being lost to time again. Cycles very familiar to Latin American history. What do I do with the ashes? Is there a recovery? How do people deal with loss? How do Latino Americans deal with that fragmented history? What’s that histories relationship to contemporary times? This residency would benefit the number of people I reach for this kind of project from everyday people to specific communities.” 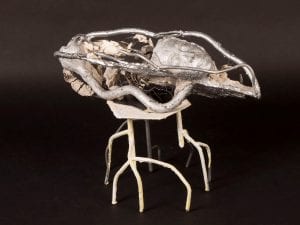 Fanni Somogyi was born in Hungary and is working and living in Baltimore, MD. After spending two years at Vassar College she transferred to the Maryland Institute College of Art. She received her BFA in Interdisciplinary Sculpture in May 2019. Fanni creates geometric and figurative sculptures that explore themes of networking systems, modes of connection and acts of remembering.  She investigates how humans and technology have developed a symbiotic relationship, which results in the constant presence of smart devices in one’s life. She observes both digital and physical communication and its effects of one’s relationship with space and individuals. Processes such as metal and digital fabrication, and image projections are integral to her work. These include welding, aluminum casting, laser cutting and image manipulation.

During her residency, Fanni will continue to explore organic and inorganic networks, and experiment with lost-wax casting. Fanni states, “I plan to continue this research, but experiment with more sustainable materials, such as, mud, wax, and reed. I would also like to develop the performative aspect of the sculptures. They are biomorphic forms and allude to networks within the body too. Thus, the way multiple bodies could recreate systems and interact within a set space could push the work in different dynamic directions.”

Read more about past cohorts: