During the three or four months residency, artists have a chance to define their practice outside of the academic context. They are able to network with the community of professional artists who are part of the Torpedo Factory Art Center community, sharing skills, techniques, and experiences.

Congratulations to the 2016 Residents 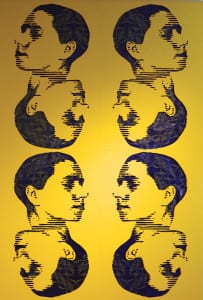 A recurrent theme in Paulette Palacios’ work is her self-portrait. She turns her own visage into a pattern to be repeated over and over again. Regardless of how painstakingly designed and crafted it is, her portrait becomes a background object. Looking at it too long begins to wipe it of its meaning. It is not driven by narcissism, but more as an attempt to understand her own existence. “The human face is a pattern in itself, as well as an object in the pattern of humanity. At the end of the day, it just becomes a beautiful object. Considering it from this perspective gives it new breath.”

Palacios has not had a formal studio space for her art since finishing her degree. She’s eager for the opportunity to get the wheels moving and having a spot to dive in and make a mess. Her current series has some sculptural objects, but she is also planning on creating screen prints during her time in Studio 12.

Palacios earned her master’s of fine art from Cranbrook Academy of Art in Bloomfield Hills, Michigan. She received her bachelor’s of fine art as well as a master’s of art in teaching Corcoran College of Art and Design in Washington, D.C. Palacios has shown her work in and around the D.C. region at locations like Pyramid Atlantic, Washington Print Makers Gallery, Carol Square, and Hillyer Art Space. She predominately works in printmaking and alternative processes.

Anne Smith’s interest in real and imagined spaces is evident in her drawing, printmaking, and sculpture. A line becomes a path. A path is an edge, boundary, and transitional marker. As she draws, which is open-ended and exploratory by nature, there is an uncertainty in her process of making; one that permits change, chance, openness, and acceptance of failure.

During her time at the Torpedo Factory, she will focus on the Potomac River as it flows beyond the building’s walls and create regular screen prints based on her observations and research. Each print will be displayed on the walls of Studio 12 so that during the course of her residency, it becomes full of interpretations about this singular spot on the riverside. “I consider all of my work, no matter the medium, to be a sort of drawing, searching for the articulation of spaces both intimate and far away. This residency will allow me to learn more about the Potomac, which is itself a path, and continue experimenting with silkscreen printmaking.” 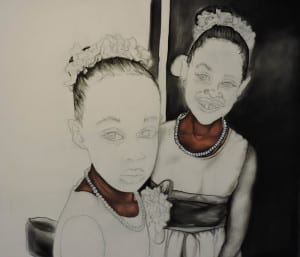 Danielle Smith’s work is fueled by her personal experiences as an African-American woman. Her figurative paintings tell stories surrounding pivotal life moments leading to identity fragmentation from childhood to adulthood. She probes feeling a sense of belonging, yet being displaced in terms of race, gender, and class. She layers her canvasses with paintings, drawings, and text to reflect the many layers of her content. Her current focus on young black girls examines their pressures to absorb or reject Eurocentric aesthetic ideals as they form and reconstruct their adult identities.

Smith’s exploration of this theme extends down to her choice of medium. While she is at the Torpedo Factory, she plans to experiment with watercolor and oil to investigate how these two opposing media interact, yet remain separate on the same surface. “I plan to use the space as a transition from my MFA studio, which serves as a visual sociology lab. I would also love to use the residency as an opportunity for community engagement, especially with children. This is a chance to let exploration, growth, and play continue after I complete my degree, which is so valuable for as I transition into becoming a professional artist.”

Danielle Smith is a Washington, D.C.-based painter and writer, originally from Monterey, California. She received her BFA from the California College of the Arts in San Francisco and is expected to graduate from the MFA Studio Art Program at the George Washington University in May 2016. Dani has traveled to China and Australia to participate in artist residencies and her work has been featured in the Franklin Furnace artists’ book series. 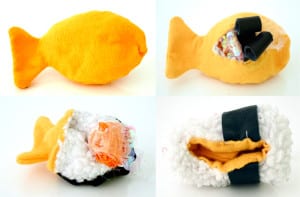 Jihee Kang creates irrational juxtapositions and modifies the scale of her work in such a way that she brings lightheartedness and humor to her soft sculptures. Her work, which is quite detailed and labor-intensive, examines issues of dualism and identity, a product of being split between two cultures, Korean and American. Her current series focuses on the transformation of an object from one shape to another. In one work, a giant stuffed sushi, embellished with sequins, beading, and leather that turns inside out to become a goldfish cracker.

Kang is looking forward to her time at the Torpedo Factory as an opportunity not only to show her work in Studio 12, but also as an opportunity to demonstrate and teach her techniques to others. “I have always wanted to work in an artistically stimulating environment like you find at the Torpedo Factory. Because I work mostly with fabric, I expect my studio will be warm and cozy. I look forward to welcoming visitors and hope to let them participate in my art making.”

Kang was born in South Korea and currently lives and works in Washington, D.C. She completed a BFA with distinction at the Corcoran Gallery of Art and Design in 2013. She is enrolled in the MFA program at American University and will complete her thesis in the spring of 2016. Kang works predominantly in sculpture and her work crosses media including installation, painting, drawing, and printmaking. She has been the recipient of the International Prize “Marche d’ Acqua” Fabriano Watercolor 2012, presented by the Museo della arta e della Filigrana (Museum of Paper and Watermark) in collaboration with InArte Fabriano in Fabriano, Italy, a UNESCO Creative City.