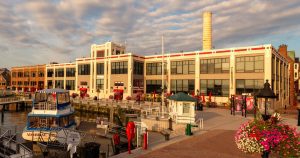 Scores of artist communities in converted industrial-type buildings have sprouted globally in the last 50 years; many modeled after Torpedo Factory Art Center. Resident Artists at the Art Center receive subsidized studio space in a City owned building ($16.88 per square foot per year) and are required to engage with the public. Best practices have evolved and adapted over time and the Art Center seeks to do the same.

One contemporary process includes regular re-jurying of Resident Artists, in an average of every 3–5 years. With the Art Center being founded in 1974, many artists have held studios for multiple decades without being reevaluated.

On December 14, 2021, Alexandria City Council approved and directed staff to implement the Action Plan for Vibrancy & Sustainability at the Torpedo Factory Art Center (Vibrancy Plan). The plan was based on a 2019 City-commissioned meta-analysis of 15 public and private reports. This included the 2016 KAPTIVATE report, commissioned by the Torpedo Factory Artist Association (TFAA), which called for a “Re-assessment of work and production in a jury system conducted by external expert evaluators” every few years (page 45).

“Expand the artist studio program to better reflect contemporary best practices, diversity, and public interaction. Outcome a. Design and implement an impeccable, credible, artist selection process to determine studio leases. Grounded in best practices, selection is based on art quality, ability to work and interact with the public, working for greater good of Art Center/community, and diversity including media, place in career, and personal background.”

The studios at the Art Center were separated into three (3) groups – A, B, or C – based on the jury date of the artist in the studio who was juried the longest in the past. However, if any single group is clustered in one area of the Art Center, that group may be divided to ensure no section or floor is unduly burdened by the jury process. In 2022, this was not an issue. Accepted applicants will be offered a three (3) year lease and be re-juried every three (3) years. Studios are divided into groups as follows: