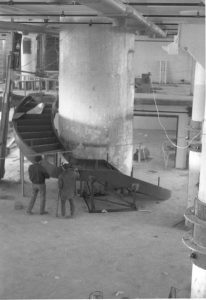 Torpedo Factory Art Center was gutted for a major renovation in 1982. Pictured: Crews work to installing the spiral staircase.

The City of Alexandria, in its commitment to Torpedo Factory Art Center’s long-term sustainability and vibrancy, has been developing strategic scenarios to implement the 2019 Action Plan for City Council to consider for the Art Center’s revitalization. There are no plans being proposed by staff, only scenarios. Plan development will begin at a later point, based on City Council direction.

The Action Plan was developed from the 2019 A Study of the Studies: Themes and Recommendations for a Vibrant and Sustainable Torpedo Factory Art Center, a meta-analysis based on nearly 20 years of public and private research about the Art Center.

Torpedo Factory Art Center is housed in a 100-year-old converted munitions plant. In the building’s history, there have been five times when it was closed and renovated into something new.

It has been nearly 40 years since there have been extensive updates to the building and all parties have generally agreed that it’s time for things to be upgraded so that the Art Center can be future-ready.

The cost estimates and financial feasibility studies related to the presented scenarios are still in process and will be presented to community groups and stakeholders as they become available.

What is the City of Alexandria’s Role with Torpedo Factory Art Center?

The City of Alexandria purchased three blocks of buildings that had been the Naval Torpedo Station (1919-1946), then the Federal Records Center (1950-1968) from the federal government in 1969. (Watch a documentary about our early history.)

In 1973, James W. Coldsmith, editor of the Alexandria Journal suggested Marian Van Landingham consider using the abandoned waterfront space for an experimental art center, populated with artists associated with The Art League, where Van Landingham was president. As the project coalesced, the City hired her as director, where she held the position until 1975, when she left for the Virginia Assembly and remained for 24 years. The City then hired Margaret Alderson in 1975. She remains as the Art Center’s longest-serving director, in the role for 10 years, and oversaw the Art Center’s major renovation in 1982.

The City of Alexandria, through the Office of the Arts, assumed temporary management of Torpedo Factory Art Center in 2016. City Council affirmed the City’s long-term commitment to the viability of the Art Center in Fall 2018. This led to the decision to create a meta-analysis of 20 years of research by various groups to determine how to strategically proceed into the future.

What are the three scenarios for City Council consideration?

Watch staff presentations about the scenarios now at torpedofactory.org/revitalization.

Why was the “Custom Program” the only scenario staff presented?

Throughout the week of October 18, 2021, City staff presented the three scenarios to stakeholder groups including the Alexandria Waterfront Commission, Alexandria Commission for the Arts, Alexandria Archaeology Commission, the Parks and Recreation Commission, and the artists and organizations at Torpedo Factory Art Center. The “Incremental Revitalization” doesn’t propose any significant changes and the “Ground Lease” would be implemented by an outside organization. The City would implement the “Custom Program,” so a financial analysis is necessary to understand the cost associated with major facility improvements. The “Custom Program” provide a framework for facility-improvement concepts to guide requirements for any such partnerships. Watch the presentations now via torpedofactory.org/revitalization.

Are you closing Torpedo Factory Art Center? Are you evicting all of the artists?

There are no plans, proposals, or otherwise to close Torpedo Factory Art Center or to evict artists. Currently, artists and organizations have leases until March 31, 2022, and are expected to be extended to September 30, 2022. Decisions for after this time period will be guided by Council’s decisions on the provided scenarios, but working artists will continue to be essential to the Torpedo Factory Art Center in all scenarios.

The Custom Program includes a reduction of 1% in space allocation for art spaces. The custom scenario shifts space allocation from individual retail studios to accommodate space for new community-focused art spaces, such as a glassblowing studio, a tech/maker space, a demonstration space, and exhibit spaces. Torpedo Factory Art Center will have as much space dedicated to artists and creation.

Many of these changes were requested by Alexandrians over the past 20 years, as outlined in reports and surveys.

Additionally, to accommodate a public-private partnership as part of the financial sustainability for the Art Center, a restaurant and/or café have also been located on the first floor. The ability for them to be placed on the rooftop became a more challenging option, given the building’s structural capacity.

The Art Center’s operations are self-funded. It is anticipated that the additional market-rate rent from a restaurant or café would help maintain lower-than-market rent for studio artists, which is $16.39/sq ft per year. 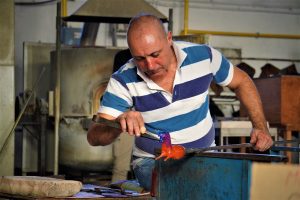 Photo by Dan Hadar on Unsplash

Why does the City want to remove the artists’ individual retail studios on the first floor of Torpedo Factory Art Center?

Visitor amenities illustrated in the Custom Program were inspired by public feedback collected over the past 20 years.

In accordance with the recommendations in the Action Plan, the Custom Program expands the type of artwork being created in the Art Center. The first floor could provide more communal spaces for artists such as glassblower, woodworkers, etc. and creates an immersive and hands-on environment for visitors, enhancing the Art Center’s cultural and artistic relevance, bringing it into the 21st Century.

The Custom Program scenario also maintains the Art Center’s Grand Hall where public and private events are held and enable those programs (and revenue sources) to continue.

Is Torpedo Factory Art Center going to put a rooftop terrace in?

The facility assessment determined the building is currently at structural capacity. It would take considerable financial investment in the structure to support a rooftop restaurant.  Additionally, the rooftop is not ADA accessible and would require an elevator be installed.  This information will be presented for City Council to consider in December.

Do the artists pay market-rate rent?

In an effort to ensure that artists can afford space in the Art Center, the City offers rent at below-market rates. This includes the cost of utilities, property taxes, marketing, staffing, programming, and other day-to-day operations.

Torpedo Factory Art Center operations are self-funded by studio rentals and private event rentals. This does not provide the City with the necessary funding to cover deferred maintenance and rehabilitation costs for a century-old building, estimated to be over $13 million over the next ten years to keep the building in fair condition.

SmithGroup is the architectural consultant firm hired by the City of Alexandria to develop the “Custom Program” scenario. A few of their cultural and regional projects include. National Museum of African American History and Culture, National Museum of American Indian, Cranbrook Academy Art Museum + Collections Building, and The Wharf.

We can't wait for you to come and explore. Find hours, directions, parking information and more.